The project of the Natural Wetlands of Cascina Oschiena has the aim of recreating and maintaining during every season a natural wetland environment for the survival and reproduction of amphibians, dragonflies, butterflies and the nesting of different species of migratory birds. The main target species is the Black-tailed Godwit, since Cascina Oschiena is the only recorded nesting site in Italy. Enormous responsibility!

Therefore in 2019, after 4 years of designing and planning, also thanks to the cooperation with Parco del Po, Vercelli Province, botanists, bird experts, naturalists and the Rural Development Program of the Piemonte Region, we were able to accomplish our dream: we created over 60 acres of Natural Wetlands by converting one fourth of the farmland from rice cultivation into a Nature Reserve.

It grants water purification and makes a unique and rich cradle of biological diversity. The Reserve is home to countless natural antagonists for pest control which helps guarantee a healthy top-quality rice. It's much better to live in synergy with Nature instead of trying to compete with it.

The real quality of food is represented not only by the quality on the plate but it consists also in what came first, how it is produced and its environmental impact. This is why Cascina Oschiena is also an ethical choice. 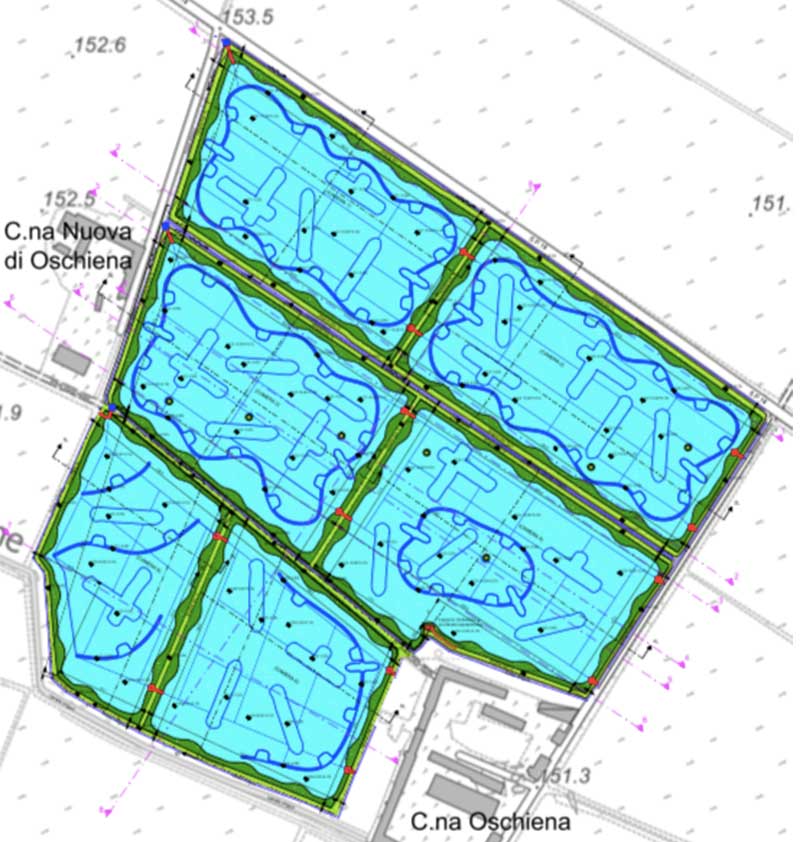 Different levels of water during the year will allow to host the maximum number of not only different animal species but also plants like the reed thicket, an extraordinary natural habitat.

For about three months a year (April, May and June) we keep a low water environment and dry or semi moist grassland areas in order to favor and guarantee a safe area for nesting and rearing of the chicks of the species of waders in strong decrease in all Europe: specifically the Black-tailed Godwit, the Lapwing and the Stilt.
During the following months (July- February) after the reproduction of the three target species, the Reserve is flooded with different water levels.

The goal is to ensure a safe breeding ground for birds during autumn migration towards wintering areas and during winter time when the paddy fields are totally dry and there are no natural wetlands available. The average water level is 6 inches, there are shallow areas for Charadriforms (Snipes, Lapwings, Sandpipers,..)and deeper areas in which the water layer can exceed 15 inches for Anatids (Shelducks, Mallards, Wigeons, Teals..).
The deepest level of water (approximately 40 inches) is in correspondence of the anti-predation ditches gradually getting less deep where banks gently slope down for landing places and fords for the chicks.

This Project is not only important for its environmental value and impact, it also represents a very significant case-study for public institutions and private entities.
Cascina Oschiena Natural Wetlands are a rare example of totally giving back to Nature a Land that has been cultivated for more than 4 centuries in the paddy field area.

The achievements in terms of increase of biodiversity after the second year are extraordinary.
Arpa (Regional Agency for Environment Protection), the Po Park, the University of Turin monitor and study quality of soil, botany, herpetology, entomology, birdlife.

Considering birdlife: we could observe 35 different bird species of major conservation value during the reproduction season.

Preserving the Environment today is not enough, it is necessary to give back to Nature for a better Future.